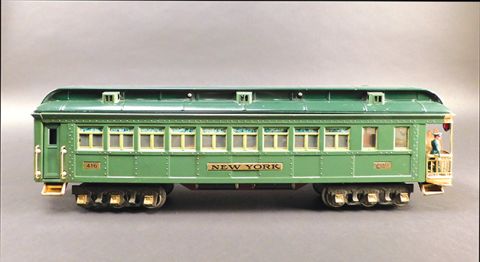 The Railroad Museum will debut a very special Lionel Observation Car (No. 416) from 1929. On public display for the first time, the prized artifact is part of the Museum’s extensive and internationally recognized toy train collection donated to the Museum by the Sefton family in 2002. The vintage toy train is especially unique due to its personal connection to Thomas W. Sefton. In fact, it was once on display in a glass showcase in Sefton's office at San Diego Trust & Savings Bank and was used as a conversation starter for those who visited his office. Observant guests to the Museum will even be able to view a small photo of the Sefton family inside the toy train.

The pre-war green State observation car (Type 1, standard gauge which is part of a State Set) will be on display for the month of August 2019 in a special case at the entrance to the Thomas W. Sefton Gallery on the Museum’s third floor. Accumulated over four decades by the late Mr. Thomas W. Sefton, the crowd-favorite collection includes 20th century toy trains, Buddy "L" riding toys, and railroad-related artifacts, featuring approximately 7,000 toy trains and a variety of accessories, such as locomotives and railroad cars from companies including Buddy “L,” Ives, American Flyer, Marklin, Marx, and Lionel.

In addition to the prized toy train on temporary display inside the Museum, the Museum Store will offer a special $5 price (normally $9.99) on the 30-page full-color guidebook that highlights the Thomas W. Sefton train collection during the month of August.

Railroad Museum admission is $12 for adults, $6 for youths (ages 6-17), and children ages five and under are free. More information about the California State Railroad Museum is available at 916-323-9280 or www.californiarailroad.museum.