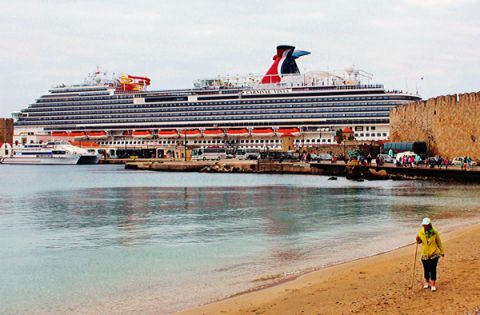 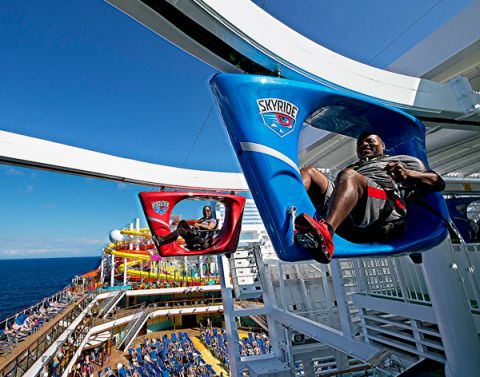 Carnival has found an innovative way to combine excitement with exercise with its brand-new, no extra cost SkyRide. Created by the founder of Rollerblade, it’s like riding a bike, only you’re pedaling while suspended on a rail above the deck. And the view! Breathtaking vistas are found inside the ship as well on the three-deck-high screen of the first IMAX at sea.

Clearly, the Fun Ship 2.0 upgrades Carnival Cruises has been making fleet-wide since 2011 are just a tease for something bigger and better. That something, the freshly christened, bar-raising Carnival Vista, comes to America in November.

It’s indeed bigger; Carnival’s first new ship in four years is the largest in the fleet for both passenger capacity (3,954) and tonnage (133,500). As for better, subjective as that descriptor is, the Vista makes a strong case having on one ship all the Fun Ship 2.0 refurbishments being added to the older vessels, ranging from concept bars and upgraded dining options to inventive entertainment offerings, along with industry firsts among the many new features on board.

At Carnival’s invitation, I checked out the bright, shiny ship one sail after its maiden voyage. Exploring and observing from bow to stern, starboard to portside, here are observations made during the 10-day Mediterranean cruise:

First Impressions: Disconcerting as it was to walk onto a Carnival ship and not be awestruck by towering glass elevators, the three-story, vortex-shaped DreamScape is a grand replacement of the atrium’s signature piece. The HD LED tube changes graphics several times during a cruise, and is just gorgeous. True to its name, the Vista was designed with views in mind; several dining venues have indoor-outdoor seating. Carnival’s fun for all ages reputation is bolstered by new offerings for often underserved older teens and the cruise line’s first-ever raft and watertubing adventure called Kaleid-O-Slide.

Industry Firsts: Carnival has found an innovative way to combine excitement with exercise with its brand-new, no extra cost SkyRide. Created by the founder of Rollerblade, it’s like riding a bike, only you’re pedaling while suspended on a rail above the deck. And the view! Breathtaking vistas are found inside the ship as well on the three-deck-high screen of the first IMAX at sea. The 187-seat IMAX, combined with the intimate Thrill Theater, a separate screen showing exhilarating multi-dimensional, shorter-length movies, makes the Vista the first nautical multiplex. The first brewery on a North American ship also is onboard, offering three craft beers.

From 2.0 to New.0: Besides cool industry firsts, Carnival Vista offers a “greatest hits” of the line’s newest features. SportsSquare, already on the Breeze, Magic and Sunshine, is a fresh and colorful take on such shipboard recreational mainstays as basketball, mini-golf, foosball and ping pong. The equally all-ages SkyCourse, also on those other three ships, is an elevated ropes course featuring two levels of challenge. The best of the Fun Ship 2.0 upgrades are all present and accounted for. Branded bars specializing in rum and tequila drinks, and a cocktail “pharmacy” called Alchemy Bar are popular watering holes, and the best burgers on the high seas come off the grill at Guy's Burger Joint, created in partnership with celebrity chef Guy Fieri.

The Food: Nothing on the ship beats those burgers, not even the surf and turf at the steakhouse, but if your heart is set on trying other fare, newer choices include Seafood Shack, serving up New England-style dishes for an upcharge at lunchtime. On the menu until its gone are fish caught on port days in indigenous waters, and you can even have that fish prepared for that night’s dinner wherever you decide to dine. Dishes representing the region you just visited are part of nightly “Port of Call” specials in the main dining room, and not once did the fish or lamb selections disappoint. While the upcharging JiJi Asian Kitchen and Bonsai Sushi Bar failed to impress due to ill-trained staff and so-so food, what did wow were the premium Fahrenheit 555 steakhouse (grilled double-cut lamb chops were sublime) and Cucina del Capitano that serves up eggplant parmesan, braised short ribs and fried calamari rivaling the best land-based Italian restaurants.

That’s Entertainment: Playlist Productions-branded shows, coming out of Fun Ship 2.0, put an end to cheesy stage shows with dazzling use of LED screens, contemporary choreography and actual music from this decade. Playlist’s newest production, the movie-themed “Flick,” had a triumphant world premiere during our sail. Standards from over 25 movies, including “Titanic,” of all films, are sung and danced to with a mystical bent in Cirque du Soleil style. The talented cast and a live seven-piece Cuban-inspired band kill with “Amor Cubano,” a hot new show featuring a refreshing playlist of Latin and Caribbean numbers. “America Rocks!” the third new show on the Carnival Vista, invigorates well-worn cruise show favorites from the likes of Bruce Springsteen, Kiss and Lynyrd Skynyrd. Even if the songs are tired at least the technical aspects and high-octane energy of the singers and dancers are mind-blowing.

Unique Accommodations: Carnival debuts two nifty “neighborhood” concepts with Vista. Family Harbor on Deck 2 offers staterooms that sleep up to five people and an exclusive lounge stocked with large-screen TVs, games, refreshments and a concierge. Carnival marketing says the new Havana Cabana suites (for guests 12 and older) on Deck 5 will make you feel like you’re staying on an island resort. Believe the hype. The sense of going tropical is complements of special décor, a private lanai and exclusive access to the lively indoor-outdoor Havana Bar that serves complementary Cuban-style food during the day along with specialty coffees and cocktails.

Development Areas: For a new ship with the latest systems available, ventilation inside the casino is surprisingly poor. Exacerbating the problem is the inability to walk around the cloud of smoke when heading from the lobby to key food and entertainment venues on Deck 4. I can’t recall another megaship that doesn’t have an alternative path to circumvent the gaming area. Also, opting against traditional stadium seating in favor of individual chairs, the design of the 1,400-seat Liquid Lounge where the big production shows are staged is problematic. Without stationary chairs, people were configuring rows that essentially created barricades, removed natural aisles and gave some folks no leg room – a potential fire hazard. Also, only the two back rows are tiered and fastened, so line of sight was lousy for all but the very tall and those in the first rows.

Bon Voyage: Carnival’s new flagship will spend the remainder of her inaugural season cruising the Mediterranean before embarking on a 13-day repositioning voyage to New York on Oct. 21. With the ship’s second cruise out of the Big Apple in November, Carnival Vista will arrive at her new home of Miami to offer year-round Caribbean sailings. For additional information, contact any travel agent, call 1-800-CARNIVAL or visit www.carnival.com.

Bottom Line: Over-brimming with novel features and others that improve on the familiar, Carnival Vista sets the bar for the company. Casino notwithstanding, the fleet’s biggest and brightest is a breath of fresh air, and ranks among the best ships this frequent cruiser has sailed. 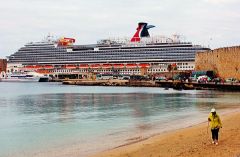 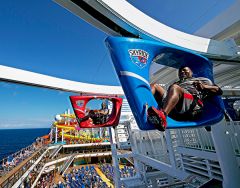 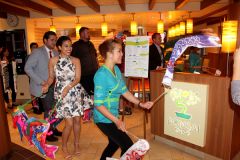 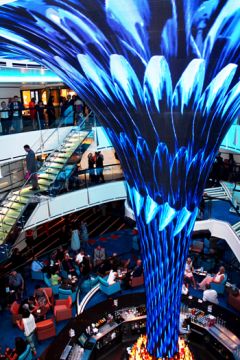 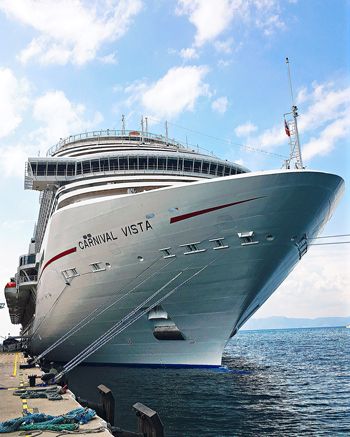